Author's note: I attended a poker event in Las Vegas last weekend with a lot of people I know. A number of them said nice things about the blog, but one comment in particular stuck with me. It was, "Write more." No frills, just that simple comment. As a writer, I can't think of any sentence I could be happier to hear.

This guy's comment made me realize that I need to be more disciplined and dedicate the time to writing. So I'm making both a statement and a personal commitment: from this post forward, I'll be posting at least once a week. And to keep my feet to the fire, if I miss this deadline and you're the first to point it out, I'll donate $100 to the charity of your choice.


In 2004, PokerStars held our first World Poker Tour event on a Royal Caribbean cruise ship (for more on that near-fiasco, see "How I almost went to jail as a terrorist"). In a long career that has included many live events, there was really nothing that compared to the cruise in terms of sheer complexity and potential disaster.

We had spent a lot of money branding the event as the "PokerStars Caribbean Adventure." Having backed myself into a corner, I attempted to fight my way out by finding a land-based venue in the Caribbean that could become home to PCA from 2005 forward. I didn't think our group was that big - we took a total of about 600 people on the cruise, including staff - but since the poker boom was in full swing we expected that we might have 1,000 or more people for our second event. I expected to find a lot of choices, and I was shocked to discover that there were very few venues in the Caribbean that could handle a group our size.

I had talked with the Atlantis Resort & Casino before we chose the cruise ship. Atlantis seemed like a natural location for PCA - exclusive resort with a nice casino and plenty of room for us to grow - but there was zero, and I mean zero, interest when I contacted them in late 2003. Poker wasn't yet legal in the Bahamas, so there would have been some work to do to run this event, and despite the fact that we were talking about spending $2 million I just couldn't get their attention.

Funny side note: we had talked with the Maho Beach Resort in St. Maarten in both 2003 and 2004. Maho Beach was, at the time, the second-largest resort in the Caribbean, and could have handled our group. I seriously considered it, even had them send me a contract, but lost interest when I saw this actual, unretouched photo taken at Maho Beach Resort: 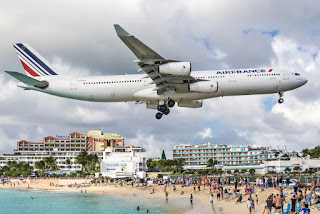 I'll talk more about the first year's event in another post (as I've said many times, this blog is stream-of-consciousness for me). It had its very own personality and is worthy of its own story. Suffice to say, though, that Atlantis decided that they liked our group, and we decided to return in 2006.

Atlantis did us a huge favor and allowed us to store a lot of our event equipment on-property. This may not sound all that praiseworthy, but (1) it was a lot of stuff (50 poker tables, 2 safes, chips, cards, desks, podiums, etc.) and (2) getting equipment through Bahamian customs was not a trivial process. So when we returned for our second Atlantis event in 2006, most of our supplies were already there.

Sharon (who by this time was running PCA) and I arrived at Atlantis the week before PCA started in 2006 and met up with our team. We set up the tables, took inventory, made sure we had everything we needed to run both cash games and tournaments. We were quite unhappy to discover that one of our podiums was missing, but figured we could cobble something together, which we did.

At dinner the night before PCA, Mike Ward, our tournament director, asked an interesting question: "Has anyone seen the dealer buttons?" No one had, but we were sure they must be around somewhere; we made a note to check when we got back to the poker room. But after an exhaustive search, we realized that the dealer buttons must have been in the missing podium.

Now this may just be me, although Sharon, Mike and Lee Jones agreed with/humored me, but I think that using beer caps for dealer buttons is just unprofessional. So we all started combing online sites to see if we could find a company that could supply us with 100 dealer buttons (we added a lot of tables that year) and get them to the Bahamas on one day's notice. We were surprised to find that no one could. I called friends at Hollywood Park and the Bicycle Club to see if we could borrow 100 dealer buttons, but none had that many to spare.

I should mention here that I spent a fortune that particular year to get PokerStars some positive exposure in the mainstream press. Poker was red-hot, and we were one of of the biggest poker businesses in the world; I wanted us recognized along with the other big names in the business. So I dedicated a huge chunk of my budget to bringing mainstream media to the event. Over 100 reporters and columnists were attending PCA that year, mostly on PokerStars' dime. I went from concerned to alarmed that this tiny thing would become a focus. We had every tiny detail right, but we blew it on something that costs $2.

Right around the time I had worked myself up into a good frenzy, Lee came up to me and told me he had found a place near Ft. Lauderdale that had enough dealer buttons, but they couldn't ship them to us in time for the event. Fortunately, we had a vendor that we did a lot of business with whose offices weren't far from this company. I called Lee Cutler from Romp Media, the company through which we were buying almost 50% of our TV time. I figured I'd offer him a free, short vacation in the Bahamas if he'd go pick up dealer buttons for me and bring them to Atlantis.

Unfortunately, Lee had a family commitment, and he couldn't come and stay for the event. But PokerStars was such a big client - I'm sure we were his largest - that he was willing to get on a plane and fly down with the buttons, hand them off to us and fly right back. (Oh, yes, I asked if the airline would carry them as freight - Bahamian customs restrictions prevented it. They would have been stuck for up to a week.) I booked a ticket for him on a 1:00pm flight the next day, returning at 6:00pm.

The next part of this story comes second-hand from Lee Cutler. He went to the airport in Ft. Lauderdale and was waiting for his flight to the Bahamas when he saw a guy in a PokerStars jacket. He approached the guy and said, "By any chance, are you going to the PokerStars event at Atlantis?" The guy nodded. Lee said, "OK, I know this may sound fishy, but..." and then told the story. As luck would have it, the guy happened to know me. Lee pulled out a plastic bag with 100 dealer buttons in it, handed it to the guy, and went back home instead of making a six-hour round trip to the Bahamas.

Later that night, I was getting ready for the opening night cocktail party when Chris Moneymaker popped into the PokerStars office next to the PCA poker room. After saying hello to the staff, he reached into his PokerStars duffel bag, pulled out a small package and handed it to me. "Guy in the airport told me to give this to you," he said, and handed me 100 dealer buttons.

And that's how the world's most famous poker player became our courier.
Posted by Dan at 12:08 PM