I am not a dog person

I grew up with a love/hate relationship with dogs. My sister, brother and I grew up with dogs - my earliest memories include an eating and pooping machine named Tammy. That would have been fine had Tammy also been a fun, kid-friendly dog. She was neither of these things.

Tammy, a poodle-mix mutt, was a 50-pound doorstop whose best day was when someone inadvertently left an outside door ajar. When this happened, Tammy turned from languorous sausage into fleet-footed roadrunner, moving at a speed that was incomprehensible given her size and distinct resemblance to the Hindenburg. The next hour was typically consumed by our entire family scouring the neighborhood for our missing blob. I passingly considered what it meant that we owned a dog whose greatest passion was for getting away from us.

My mother, with what I know were the best intentions, insisted on taking in the dogs that no one else wanted. We adopted Piddle, whose name accurately described her from the day we got her. Piddle was another black dog, this one a little smaller and of entirely indeterminate breed. Piddle ran a bit faster but was otherwise indistinguishable from the other black lump.

And there was Tigger, some sort of mid-size mutt who had distemper as a puppy and suffered substantial brain damage as a result. Tigger had a significant twitch that made her look like she was doubting each word spoken to her. She tolerated all of us, but for reasons none of us understood, she adored my dad. And my dad, like me, was not a dog person. This made her insistence on jumping up in his lap and sitting up proudly even funnier, especially since she was a good-size dog.

My mother always used to give the dogs a treat before bed. With Tigger, it was usually a piece of white bread, which she would dutifully carry to her little scrap of carpet to eat. As she got older and brain damage became dementia, she still took the piece of bread, but no longer remembered what to do with it. She'd walk around the kitchen, proudly sporting her slice of bread, and in the morning we'd invariably find it somewhere with a Tigger-mouth-shaped piece missing.

It was against this backdrop that I was forced to consider this suggestion from Sharon: "We should get a dog." I had long since figured out that not all dogs were the amorphous masses I grew up with. We had some friends living with us for a while who had a beagle puppy, and I admit that I liked having him around. But there was a big difference between someone else's dog and my dog.

I should also mention here that I have always seen myself as a cat person. We didn't have cats when I was a kid (except for a few brief stints), but I got a cat as soon as I moved out of the house and have had at least one ever since. Cats are my sort of pet - show them the litterbox once and they know where to go for life, and otherwise all I need to remember is to feed them. My cats have always had their share of love and attention, but they've also been entirely independent, deigning to let me pet and scratch them on their schedule. This has always been fine with me.

Not a dog person.

Twelve years ago, I was on a business trip in Sweden. On my second day there, I had a dream that Sharon called me and said, "I adopted two dogs." I decided to call her before leaving for my first meeting of the day just to make sure it was a dream, and when she picked up the phone, I couldn't hear her at all - all I could hear was yipping. I hadn't been dreaming. I was now a dog owner.

(In fairness to Sharon, we had discussed getting a dog for a long time. I wasn't ready, but Sharon correctly pointed out that, given my dog history, I probably wouldn't ever be ready.)

I'm not going to write a lot here about Inigo and Buttercup, the two black lab shelter dogs that Sharon adopted. I will just say this - I had no idea what dogs were all about until we had these two. It never occurred to me that I could have a relationship with a dog that involved more than food and poop. I am pretty sure they both knew that dogs weren't my preferred pet, and they did everything in their power to wheedle themselves into my reluctant brain.

By the time they were a year old, I couldn't imagine being without them. In fact, I suggested to Sharon that, since they both loved sleeping on the bed, maybe we should let them sleep with us every now and then. They became a permanent fixture, not an inconsiderable thing given their combined weight of 175 pounds.

I was still not a dog person.

Earlier this year, we decided to get a third dog after a great deal of agonizing. We adopted an adorable 6-year-old Mastiff, a puppy mill dog that had had at least five litters of puppies. The day after we adopted Morgan, Buttercup died. We were heartbroken and once again back to two dogs. We started talking about getting another dog, but really needed to get over Buttercup. We started looking anyway.

We really wanted another big dog - a Lab, Great Dane or something in that giant dog range. We had never considered German Shepherds, but one of the shelters we found had a litter of five Shepherd puppies being fostered. We decided to have a look.

This is where this story takes an odd turn. Inigo and Buttercup were Sharon's dogs. She trained them, spent more time with them than I did (I was traveling for work about 75% of the time) and was clearly the Alpha for them. I had, somewhat jokingly, suggested to Sharon that this dog should be mine. She took this suggestion very seriously.

We went to visit the foster home, who had a dog run and pens in the back of their house. The foster mom let the puppies out, and three of them came charging over to where I sat on the ground near their pen. Two of them jumped, snapped, barked, bit and scratched in an attempt to get my attention. The third butted her head up against my chest, curled up in my lap and went to sleep.

I know how this is going to sound, but I am going to tell you what happened next anyway. I heard a voice in my head that said, "I'm Lana." I hadn't thought for an instant about dog names, or even whether this was the dog I wanted. Sharon, who was checking out the other two dogs, heard all the noise and came over to see.

All I could say was, "This is Lana, and she's my new dog." And then I burst into tears for no reason I could define then or now. 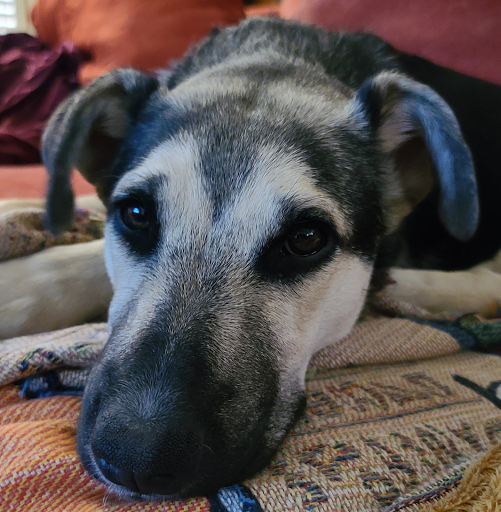 That was September 25. Two days later, Lana was looking and acting sick. After a few discussions on the phone, we took her to the vet and she was diagnosed with parvovirus, a highly contagious virus that has a spectacularly high mortality rate in puppies. There is a vaccine, but Lana had not been old enough to get it yet. We talked to the foster family and learned that every dog in the litter had parvo.

The current strain of this virus has about a 50% mortality rate. It is so serious that the vet went out of her way to remind us that Lana might well not survive the week. They strongly recommended that we bring Lana to them so they could  watch her closely 24/7.

Sharon and I talked about it, and I couldn't even conceive of giving her to someone else to care for. My dog was sick, maybe dying, and there was no fucking way anyone else could care for her better than I could. I found myself contemplating the deals we all consider when tragedy raises its head - "Let her live and I'll...". I looked at this sickly 18 pound animal and thought, "Is it possible to love something as much as I love this furball?" Two days. Two days is all it took for her to worm her way into my heart in a way that made it inconceivable for us to be apart.

And that is when I became a dog person.

This is probably a good time to mention that Lana hasn't spoken to me since that first day. It doesn't matter. She needed me to know her name, and that's all she had to say. Everything else, she has said by sleeping on my feet, curling up in my lap and licking my face. And I know exactly what she's saying.